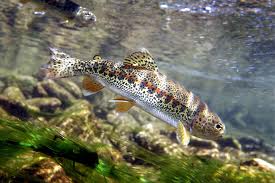 One of the first things I do when I arrive at the river is to take a walk. Not for exercise, but for information. I walk to the first run or hole that I can see into. I want to know where the trout are holding. Its important to remember that where you see, lets say, a Rainbow, may not be where the brookies or browns are. Each species will hold in different places and will change where they hold at different times of the year depending on environmental factors. I know that you don't want to read some boring scientific article so I'll try to make it quick but still provide some information for those who wish to read on. For those who don't scroll to the bottom. I made a chart.

Because trout are cold blooded water temperature is the most important factor in trout behavior. These changes can take place seasonally, daily, or even from one hour to the next. Also as water temperatures change so does its ability to hold oxygen. causing trout to move back and forth from fast riffles to deep pools. 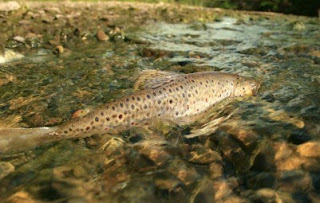 In early fall as water temps reach the mid 50's to high 40's and oxygen saturation levels are around 10 to 13 ppm (parts per million). Hatches of mayflies and caddis take place triggering trout to move into swifter currents to feed. Especially bookies and browns who feed heavily in anticipation of spawning. You will also notice male brook and browns become much more aggressive from the increased testosterone. Rainbows will follow this pattern as well to feed knowing that cooler temperatures mean winter is around the corner.
In mid winter as water temperatures fall into the lower 40's to higher 30's and oxygen saturation levels rise to 13 to 15 ppm. Brook and brown trout will move to slower water and begin to spawn. This is when you will notice females become tight lipped and unwilling to move while aggressive males jockey for position behind females. Rainbows on the other hand will stay in the currents and be on the hunt for eggs that get kicked up.
Once the fall spawn is over and the water temps drop into the mid 30's trout will move to deeper pools and away from the faster water. Holding in deeper water keeps trout safe from ice flows and icy bottoms. Also with oxygen levels at their highest at 15 to 17 ppm there is no need to expend energy in faster water.
In the spring as water temperatures start to rise back into the 40's the rainbows start their own spawning rituals. Oxygen levels drop back into the 10 to 13 ppm. Trout once again begin to move back into faster water in order to take advantage of spring insect hatches. Browns will begin to take cover in and around structure looking for young fry and may become more nocturnal in their feeding habits. 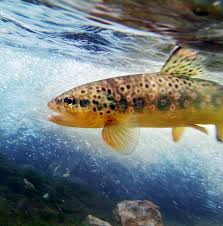 In mid summer water temperatures can rise into the 70's and oxygen levels drop to their lowest points of only 5 to 7 ppm. This causes all trout to move up into fast riffled water. With an abundance of insects on the water fish feed heavily. Early evenings and inclimate weather are big feeding times as terrestrail insects get washed into the water fish will move to river edges to feed.

Here's that chart I told you about

Of course there is some overlap on the seasons depending on where you live and how rapid these changes happen.

I hope this helps some of you out and next time your on the river and see trout all holding in different spots you'll know why.

See you on the trial,
Lance

Email ThisBlogThis!Share to TwitterShare to FacebookShare to Pinterest
Labels: Tips

Lance Milks
I consider myself to be a very outdoorsy person. I literally grew up running barefoot through the woods of western New York. As a boy, I spent hours in the woods and on the water with my father. By the time I was in high school, I would take week long ventures into the woods building shelters, catching food, and learning basic survival skills. This childhood lifestyle served me well when I joined the Marines. Now out of the military, I return to the wilderness often. Though I spend most of my time fly fishing, I still get out to hike or paddle around occasionally. As a ultralight backpacker and fly addict. I love to thru hiking the long southeastern trails, or find remote places to cast a fly. This blog is my way to share my knowledge and experiences with you. I’ll see you on the trail. Lance